H.K. Dr.Floor produces a full range of chemicals, equipment, tools, and disposables needed for caring the concrete floor. Therefore, it is the first and the leader of the business in Korea. To widen and enlarge the markets of concrete polishing, Dr.Floor opens training sessions twice a year to introduce its new products and to train new technicians. So, Dr.Floor literally offers a “total solution” to the market of concrete finishing whether it is fresh or damaged.

1) Highly competitive price: Compared with those of the world-renowned suppliers.

In an almost every aspects, Dr.Floor products exhibit close or superior test results to those of world-famous suppliers. However, thanks to the efforts of Dr.Floor’s laboratory, self-running production lines, and the direct distribution, the retail prices of Dr.Floor products and services are only about 20~30% of theirs. 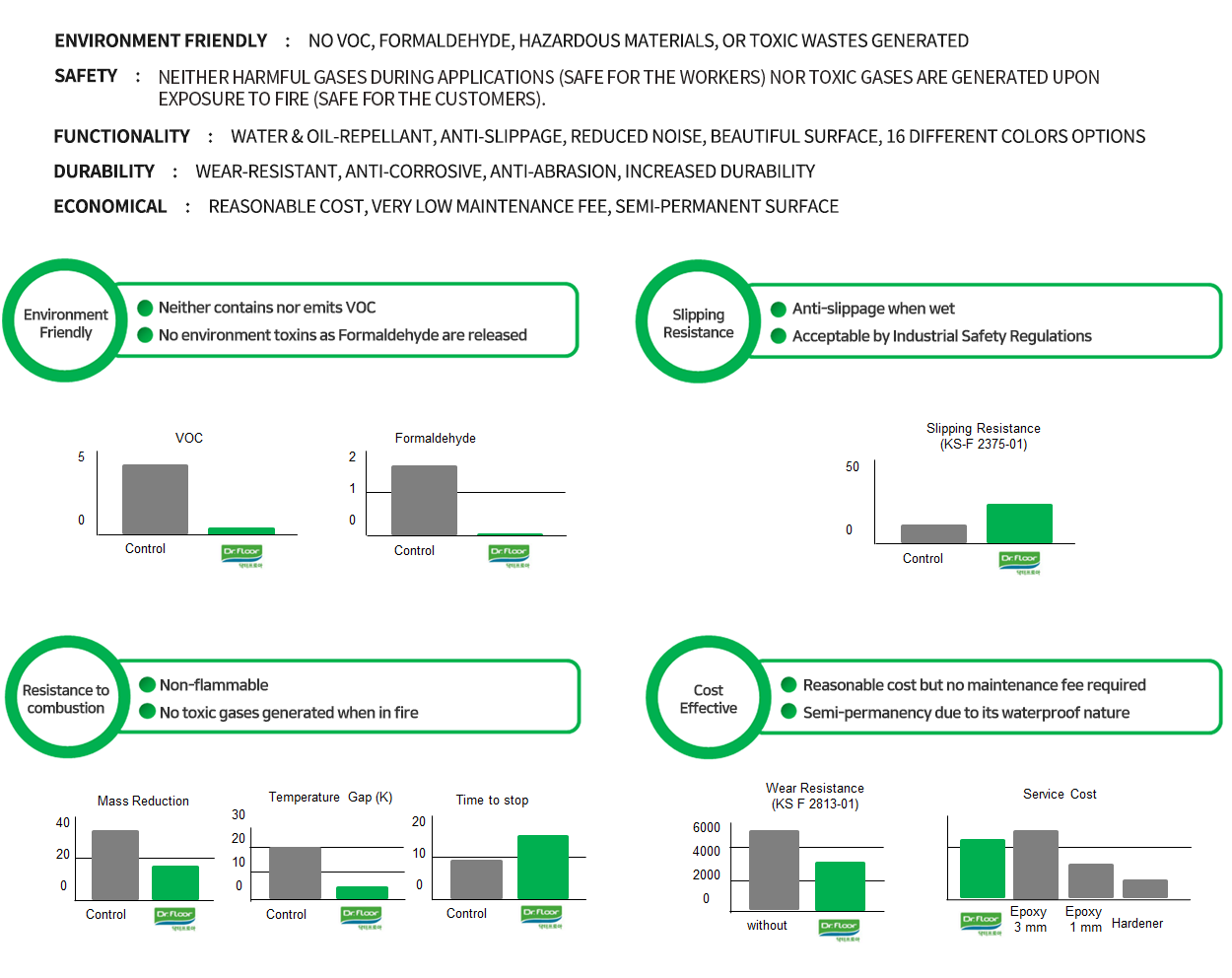 * Dr.Floor’s unique coloring system, Dr.Color-Li, displays 16 basic colors. Since these are perfectly compatible, one can express literally any colors you want by blending them in an appropriate ratio. In addition, since the reagents are water-soluble, they can smear deep into the concrete, like Dr.Crete. When desired, Dr.Color-Li can be diluted with water to express even deeper and subdued color on your concrete floor.
* The coloring tool can be modified for printing Logo, Letters, or C.I. of yours
* Epoxy Terrazzo of Dr.Floor will serve as a best tool for expressing the Artist’s impression and/or spirits of your company on your floor.
* 3-D printing using printing robots and the epoxy terrazzo are just one step away from the completion and commercialization. 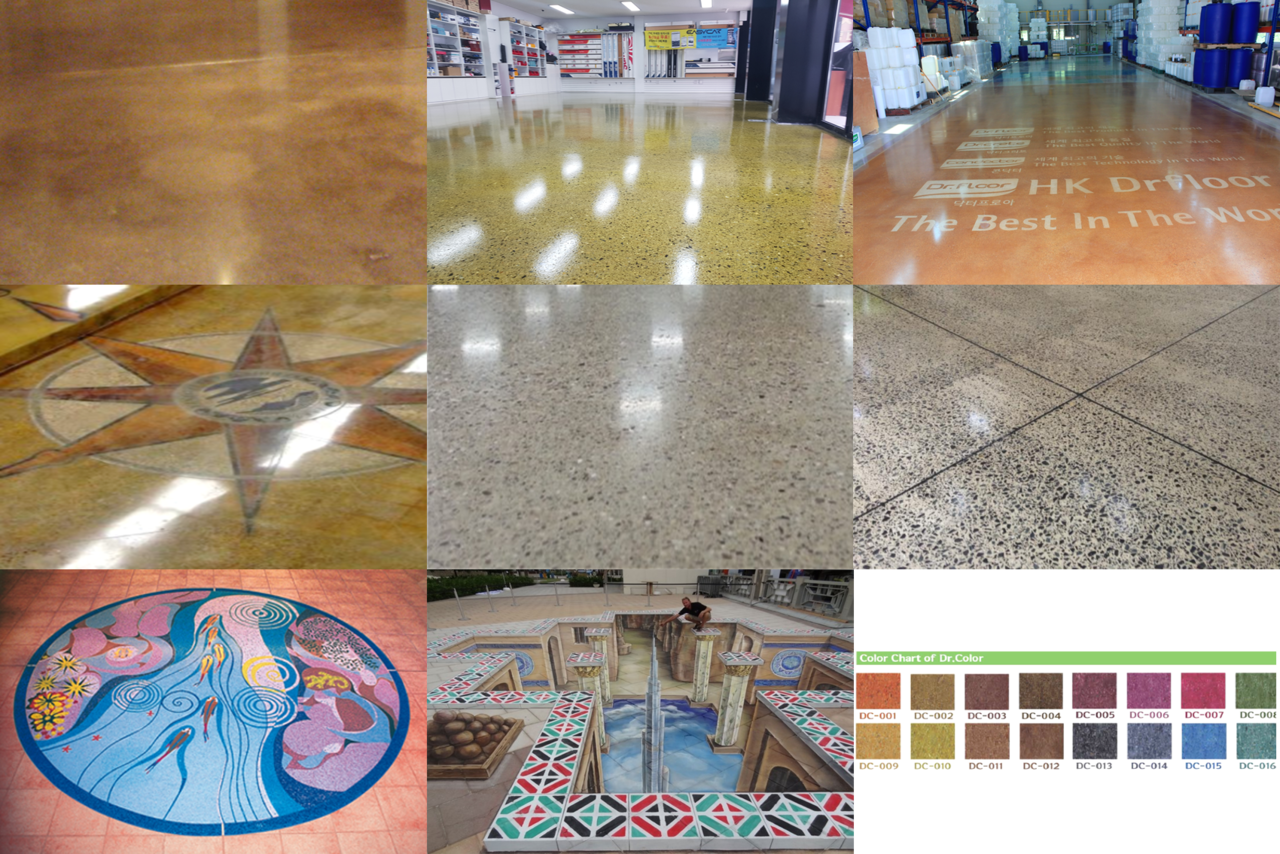 In addition, depending on your needs, Dr.Floor offers five different levels of finishing with different smoothness, glossy, or coloring. The five levels are: 1. Hardening, 2. Hardening plus, 3. Polishing, 4. Polishing Beauty, 5. Polishing Color Beauty. 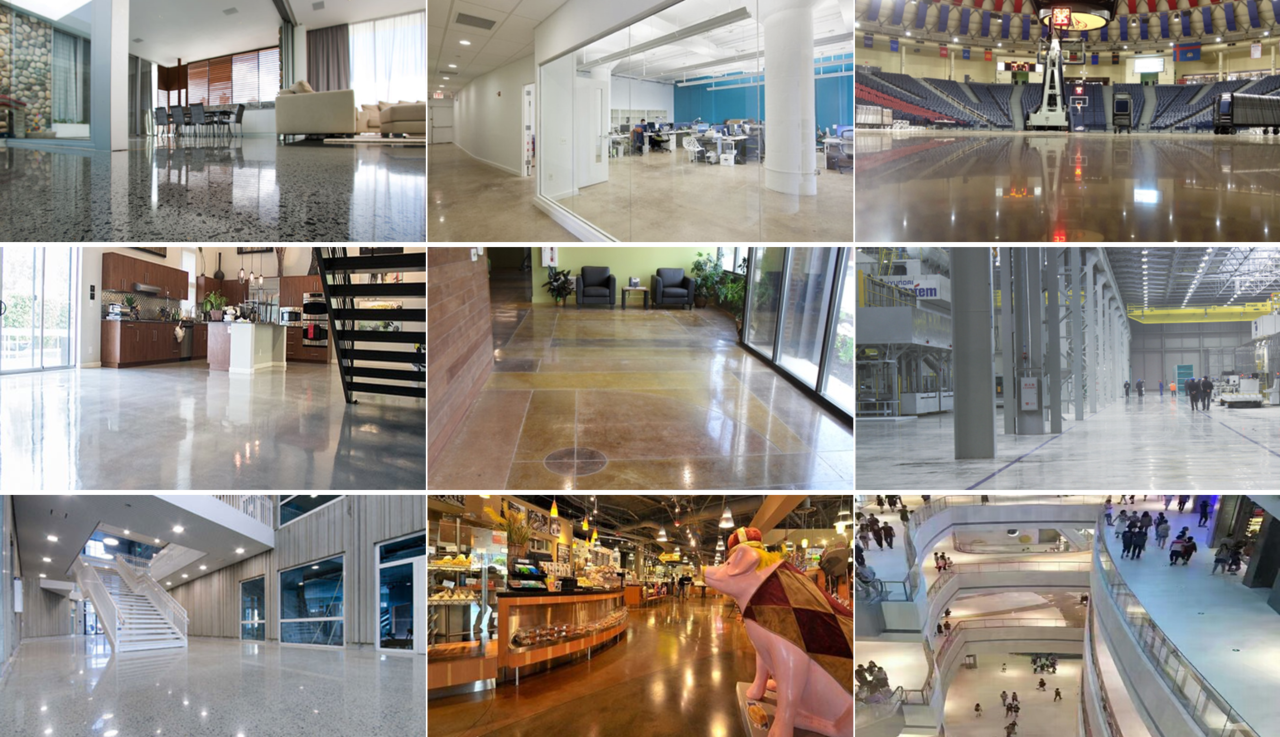 the Ultimate choice to replace the Epoxy

Epoxy is one of the most widely used finishing material for the concrete floors of factories, parking lots, and warehouses etc., just because of its low price.

But the Epoxy, a petroleum derivatives,  has innate problems in Safety, Durability, and Functionality.  In addition, it emits very toxic gases before hardened which is harmful to the workers, and also generates fatal gases in fire that is detrimental to the consumers.

Department of Environmental health of Korea University reported the health risks involved in the use of epoxy (2013, Korean Journal of Industrial Health)

Epoxy also has lost of problems in durability as well as in functional aspects.

In addition to the slipperiness and squeaky noise, epoxy needs to be repaired or re-applied in every 3 ~ 5 years, mainly due to the separation of epoxy layer from the base concrete. This is because the hydrophobic epoxy, one of the petroleum derivatives, can never be mixed with the moisture coming up from the beneath.

All the Dr.Floor products are water-based that they are hydrophilic but water and oil repellent, inorganic, non-toxic,  semi-permanent, non-slippery, and not inflammable.

So, by all means, Dr.Foor concrete polishing is superior to the Epoxy finishing. 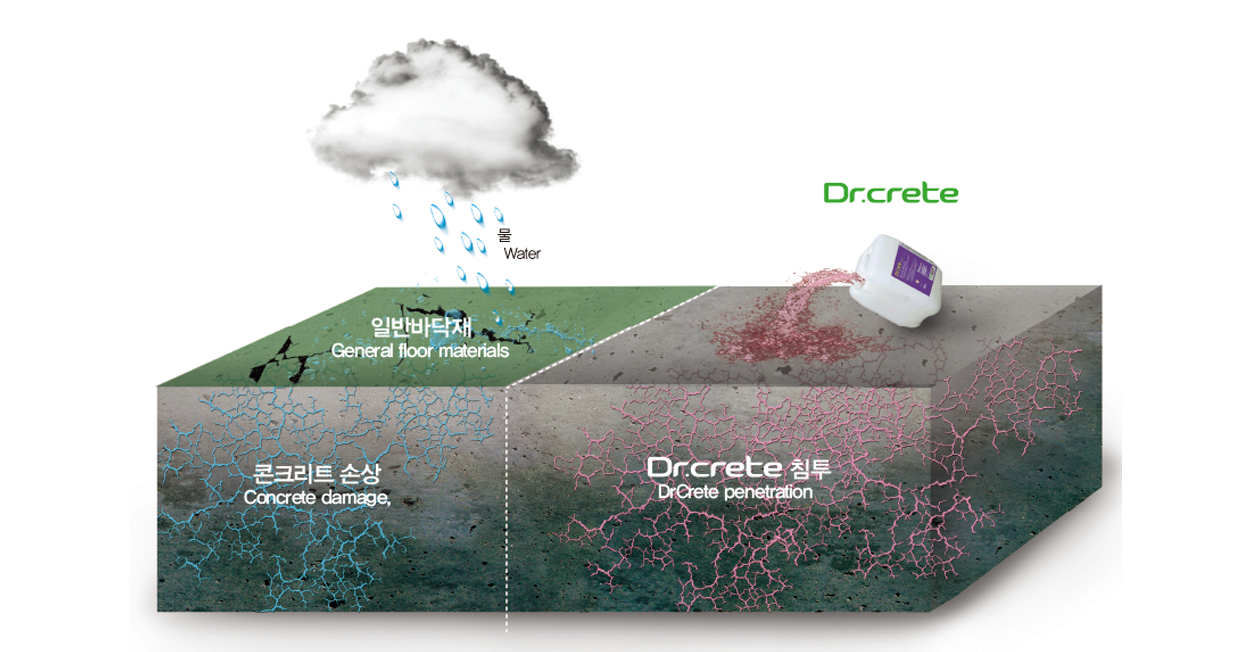 Comparison of Dr.Crete with Epoxy two years after the construction.